It is actually even harder than it sounds. 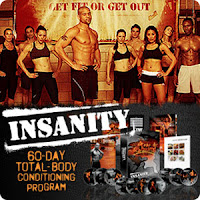 Last weekend, in a strange, strange, moment of weakness, we found ourselves stuck on an informercial for Insanity.  We were oddly convicted, both sitting on the couch after a crazy weekend.  Troy, who has never purchased anything on the internet (that wasn't football related), grabbed a credit card and bought the system.  WHA!?!?!?  I tried to stop him! But it was as if the hype just took over his brain and forced him to BUY NOW!  DON'T WAIT!  Well, that crazy guy bought it.  And the next morning, he wakes up (probably with buyer's remorse) and declares that it is the wrong workout for someone who is doing strength training.  Yeah, you know - his life goal to bench 400 pounds.  (He's at 390 now.)  So he slyly tells me that he won't be starting it until late April or early May.  Well, what's my excuse?  I decided I probably need to get a head start, so that by the time he jumps into the program I can actually hold my own next to him!  (yeah, riiiiiiight)  Well, it arrived yesterday.  In an unassuming, plain cardboard box.  Seemed harmless enough.  And since I'm such an athletic girl....no, really, I am!  Most of you don't know how madly athletically gifted I am.  There was that one time in cheerleading that....well....or that really crazy tennis match....oh, oh! and of course my intramural soccer career in college.  Yeah, well....um, truthfully, other than having 3 kids, I've done about zero physically demanding things.  [Sidebar:  Troy also has been on record saying that there is nothing physically impressive about having babies.  No joke.  Ask him about it.  Yeah, I know what you're thinking.  I almost wished a kidney stone upon him.  But of course, I'm a good wife and would NEVER wish him something like that....Shaking my head. Oh, that husband of mine! He is sassy!]  Anyway, back to my saga.  So, I'm a little out of my league.  I did the fit test last night.  And, as I expected, I'm not off-the-charts "fit".  I wasn't a complete loser, but I was close.  And tonight I did the first actual workout.  Ok, it didn't have anything too complicated in it, but it gave you NO BREAKS.  Yeah, that's not exactly my thing.  I'm big into water and breaks, and breaks and water, with the occasional jumping jack or push up.  As I'm flailing everywhere, I come up with every excuse in the books to prompt Troy to tell me to stop.
"I just had a baby!!!"
"I'm not wearing the right undergarments for this!"
"I think I just sprained my ankle!"
and the one that almost worked:  "Is that Reed crying?!?  Should I check on him!?!"
Troy saw right through my pathetic attempts, but I made it to the end.  Day 1 done.  59 to go.  And I'm sure things are only going to get more interesting when he joins me.  Yeah, Insanity.

I ate 4 pieces of pizza for lunch.