Ate, i mean EIGHT, attributes of my littlest man.

1.  He is haaaaaaaa-peeeeeee.  Happy, if you're having trouble reading that.  The kid just loves life.  Sure, he has his moments of 'hey, pick me up!' and 'don't leave the room, mom!', but he has to fuss sometimes, right?  He is just sweet and happy almost all the time. 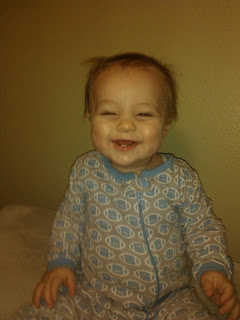 2.  He sucks his thumb. Yeah, whatevs, I'm sure he's ruining his not-even-here-yet-teeth and jaw structure, but in the meantime, he loves that thumb.  And it's cute.  Period. 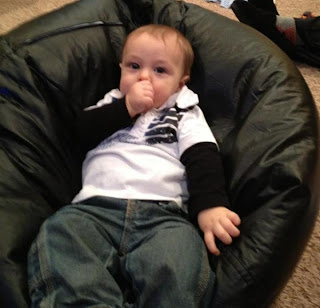 3.  His bedtime routine is precious.  Eat, snuggle, put head on shoulder, twirl (my) hair, reach for the crib, lie down, then one thumb in the mouth and the other hand reaches to pull his favorite blankie up over him.  Nighty-night, Reed!
4.  He loves to eat.  Everything. Like, everything.  Want to know the one thing he doesn't like?  Yeah, me too.  We haven't found it yet.  He's eaten almost everything his parents have.  He chewed on a celery stalk and ate an entire lemon wedge (yes, ate it, not just sucked on it) last night after his baby food, while waiting for his "real" food at a restaurant.  This MAY be why he's in the 99th percentile for height and weight.  But, people!  We really do cut him off, he's not obese baby, he's not allowed to eat everything...he just wants to.  And you know how fun it is to feed babies that love to eat everything...."numnum-num-num-num" 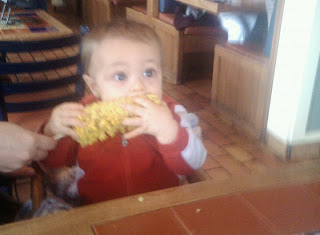 5.  His first word was Ma-ma.  It really was.  So what if he hasn't said it again in the last 3 weeks.  He did several times over Christmas and that was good enough for me.
6.  He LOVES his brothers.  They barely have to look at him and he's giggling.  He's so entertained by them...and they LOVE that he loves them.  Now that he's crawling, he soooooo wants to be part of the action. 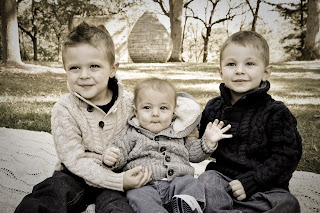 7.  He's tough and he likes the rough stuff.  This comes in handy in a family of all boys.  It also comes in handy when mom walks through a doorway and just slightly bumps his wiggly head on the doorframe. (oh come ON, you've done it too.  Admit it.)  Yes, I know that is horrible.  I've done it with each of the kids and it makes me sick, but it happens.  For the record though, I've never zipped up any of my kids tummies or chins in their jammies, never shut a hand or finger in a door/drawer or forgotten one at home.  So, I'm not THAT bad.  Getting back to my point, he just rarely is hurt; he thinks "rough" is fun.  Yes, I'm cringing as I type this...I understand 3 rough boys...but, at least I don't have sissy boys (as of today). 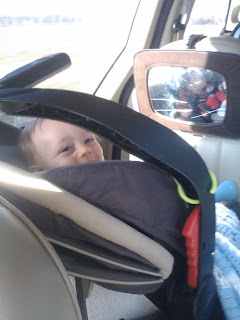 The things they say... 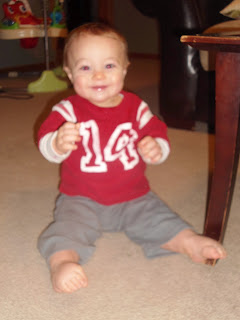 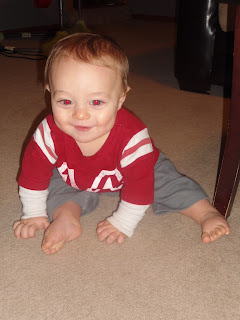 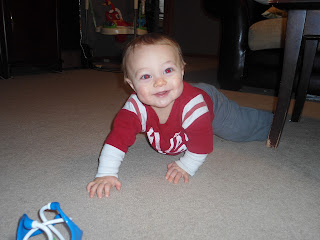 Warning:  this post will reveal my inner nerd.  My dweebalicious dorkfulness.  My hidden doofusina.  (Perhaps those weren't as hidden as I'd like to believe.)  But, continue as you'd like...and don't say I didn't warn you....

Christmas.  Since having children, I realize how easy it is to fall prey to the ads, the new latest and greatest gadgets...giving in to my kids' every wish.  But for the last 4 years, we haven't.  I know.  Roll your eyes.  Snort at my stupidity and naivete.  It's just that they are so young and don't know (yet) to ask for the big stuff.  And I KNOW that these days are numbered.  They will soon understand all this DS, IPad, insert-expensive-gift-here hype and want one.  And we'll have to deal with that then. But for now, we are simple.  This isn't bragging.  It's not comparing.  It's just recognizing that while they are young, we intend to keep it as simple as we can.  We are thankful that the true PRICELESS meaning of Christmas still edges out the glitter and excitement of Santa and presents....and we are happy to keep it that way....forever.  Although we're not naive....I was a teenager once, too....and HAD to have Calvin Kleins. [One pair.  That I wore all the time.  That certain girls made fun of me (as if I couldn't hear them) for wearing 2 days in a row.  Gasp.  How could I?  They had 46 pairs and never had to repeat an outfit.  Why couldn't I be more like them?  If they could only see me now: lounging in a hotel bed with 3 other little boys, who are tired and happy after an evening of swimming, arcade, pizza snarfing, watching a movie.  Guess what?  I'm wearing the same jeans I wore yesterday now, too.  Kiss my jeans.  Can't buy this amount of happiness and peace with a gazillion pairs of jeans.  I hope you have on your new fancy $200 jeans and that they still bring you all kinds of happiness...the kind you get from apparently making fun of others......Wow, yikes, guess I'm still a little bitter over that incident.]  Whew.  ANYWAY.....
Get to the point.  Yep.  Ok, I'll get moving.  Gotta get the blood pressure back down.

So, my point is...that while others are getting the cool stuff,  I wanted my kids to have....drumroll please.....QUIET BOOKS.  Is that not the antithesis of all the cool stuff these days?  Yep.  I warned you.  I know you're all thinking, "wow, what a super cool mom she is!  I bet her boys think she is the most awesome "with-it"-mom ever."  Or maybe you're thinking, "What in the world is a quiet book?!?"  Well, they are all over Etsy and other similar sites.  They've been around.  I casually mentioned to my mom a few months ago that I would love to have them for my boys.  They teach skills - lots of skills (as you'll see), and they teach them to sit still and work on the task at hand.  Which, frankly, one of my boys LOVES to do, and another NEEDS to do.  So I was beyond thrilled to see them open these over Christmas.  Ridiculously thrilled.  Like as thrilled as I (thought I) was when I bought my first pair of CK jeans. The boys LOVE them.  Like LOVE them.  Church, car, waiting for food, before naps, before bed, randomly throughout the day.  Love them.  And they are just beautiful. Amazing detail, talent.  Tons of stitches and work, and you can almost feel the grandma love oozing out of them ;)  Here's a few pictures of the books.  Not exactly the same genre as an iPad, but I'd argue they are even cooler...and they don't run out of batteries :)
My Mom's pretty awesome.  If you would want one for a gift, let me know and I'll get the information to you.  They are cuuuuute!
Posted by Unknown at 8:12 PM 3 comments:

My largest pinterest-inspired project yet.

Yes, I'm a professional copy-cat.  I'm not afraid to admit it.  Why go to all the work of being original and creative when there are so many others out there willing to do the first part of the project for me?  Right?  So, when I saw this:


....I knew I HAD to have it.  Now, we had a beautiful sofa table in the area outside the kitchen (what was once the eat in kitchen, I think, but since the kitchen has been extended out slightly and the entry to the sunroom was added, the space really couldn't be "eaten in", so just an awkward open area).  I loved that sofa table....Loved it.  Got it 10 years ago when I bought my first house.  It was one of my first non-Target/Walmart pieces of furniture.  However, it was big, bulky, pretty, but so NOT practical.  It stored about nothing and held about nothing on top.  And I realized that in a house with 3 boys, practical beats pretty.  BUT, this little pinspiration was pretty AND practical.  Me thinks:  'How easy is this?!?  A few bookshelves, a bench, some wainscoting, and a shelf! It will take like 10 minutes to execute.' And then....reality.  Nothing is as easy.  Sigh.  BUT, all things considered this was pretty stinking easy.  Here's mine. 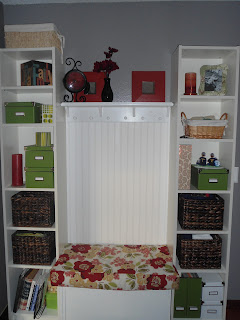 PLEASE, PLEASE, PLEASE, notice my GRAY walls.  That's GRAY.  Say it with me, "GRAAAAY!" Not smokey lavender, not bluish-gray, not purple-ish gray.  Just good old fashioned gray.  Right? If you ever set foot in my kitchen and call my walls ANYTHING other than gray, I will kill you kindly disregard your ignorance, colorblindness opinion.

Sorry, where was I?  Uh, yes.....Bookshelves (IKEA $30 each), Shelf (Amazon $39), Wainscoting (Home Depot $19, used half), Bench (FREE - it was the nursery's under-utilized toybox), Accessories (IKEA for next to nothing, or stuff we already had on hand), Bench cushion (....well...I underestimated the cost of foam, but got it half off thanks to a Hancock coupon, still...the foam, batting and the material were close to $40).  So for $158, I can hide a LOT of junk.  Mission Accomplished.  Better Homes and Gardens, thanks for the inspiration.  But, I like mine more.  Hee hee hee.   Oh, and there's another little pinspired item in there.  See it?  The shiny tall, skinny box on the right side?  (next to the statuette of those 3 little cutie-patoooooties?) Yep, that's a cereal box, cut down, and covered with scrapbook paper to make a file folder, magazine holder, paper boxy thingy.  That's more my speed that big furniture-organization units.  :)
Posted by Unknown at 6:31 PM 3 comments: